I promised to search around for some more evidence that local councils approve far more dwellings than are built. This would go some way to addressing the argument than planning is restrict, particularly zoning controls and approvals processes.

This report, by the Queensland Office of Economic and Statistical Reseach, adds to the previous evidence on a deevlopment approvals for subdivisions greatly exceeding the ability of the market to absorb the new land.  It outlines the number of development approvals for infill multiple unit dwellings in the pipeline at various stages of approval for South East Queensland.

The telling figure is that there are 48,152 approved new infill dwellings in SEQ, with another 29,014 at earlier stages of approval.  Remembering that there are also 30,566 approved subdividede housing blocks, we have a total approved supply in this region of 88,718 dwellings! Even at its recent peak population growth in SEQ was only 88,000 per year.  That makes about 2.5 years supply of dwellings already approved.

Other government reports which have compiled useful information on the potential housing supply available under current planning regimes.

This report notes the following

“...there appears to be a very low risk of the current broadhectare land not providing at least 15 years supply, particularly when the increased density and infill targets set by the SEQ Regional Plan are considered. Based on the SEQ Regional Plan assumptions for infill, then only 244,000 lots would be required over a fifteen year period”

Moreover it explains that the stock of approved lots represents 3.3 years supply.

We can take a look at a national level here and see that current planning schemes have the potential to yield 131,000 new homes per year for a decade from 2008! This excludes the increase in housing stock from developments with less than 10 dwellings.  In the abovelinked OESR report they state that smaller developments of 10 or fewer dwellings accounted for 69.5 per cent of projects at June 2010. This means the estimate of 131,000 new homes accounts for only 40% of the actual supply available under current planning schemes.

Even so, they sum up their analysis of land supply by stating that there was approximately 7–8 years supply of zoned broadhectare land in 2007. 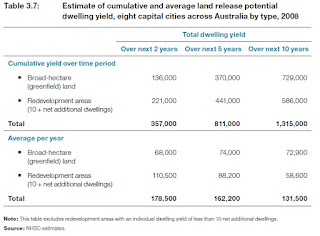