The housing bubble debate often leads to claims that town planning controls and approvals processes are a contributing factor to the price boom. It is argued that such controls can constrain the rate of housing supply during periods of high demand, allowing prices to ratchet up. But there is no case for the argument that planning controls can influence the general price level of housing.

For those unfamiliar with property development, the following lessons may be of interest.

Imagine a town zoned for 5 storey buildings up to its new greenbelt. At the boundary of this town there will be a situation where one block of land greatly differs in value to its neighbour by virtue of being inside the town while the neighbouring block is in the greenbelt. This difference is the price gradient.
At the other side of the greenbelt one could expect nearby towns to experience a similar price gradient at the edge of the greenbelt. But most importantly there will be a price gradient between the main town and neighbouring town that partly reflects the costs of traversing the greenbelt.  These two towns are substitutes. Lesson 1: There are always substitutes.
If the greenbelt didn't exist, homes would be built in that area at an intermediate price giving a smooth price gradient, but fewer homes would be built inside and outside the greenbelt.  The most interesting thing is that if you reduce the cost of traversing the greenbelt, by extending the rail network across it or expanding highway capacity for example, this price gradient between towns will decrease – it will decrease the price premium for living within the greenbelt, and increase the prices of home outside the greenbelt to reflect these reduced costs - the symmetry of the price gradient ensures that the general price level is unaffected.
This gives us Lesson 2: Location premiums work in both directions.
What about the rate of delivering new supply over time? Surely planning impacts prices by affecting the rate of development? The short answer is no.
Lesson 3: The rate of land and housing supply is determined by the rate of sales of new stock (known as the absorption rate). It has nothing to do with the rate of development approvals or even the price level.  Describing the market in classic economic terms (although a poor representation generally), the supply curve for residential land and housing is vertical, and shifts to the right at a rate commensurate with sales of new land and housing stock (until a theoretical limit imposed by planning which is reached when is it not possible to develop a single extra dwelling - hence theoretical).   The image below is the best representation of the market using supply and demand curves. 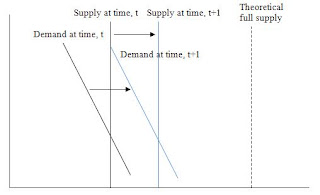 This is in stark contrast to the common position of elastifying the supply response to price increases. Such talk is clear evidence of a misunderstanding about how land supply reaches market. The following example demonstrates.
A new land subdivision has 20 lots in an existing suburb of 100 homes. This subdivision keeps 3 new lots for sale at any given time and achieves a sale about once every 2 months. Also in the suburb is a farmer who wants to sell his land, which could be subdivided into 20 lots under current planning rules.
A developer is assessing the feasibility of subdividing the farmers land. One important thing he needs to know is how long it will take to sell the 20 lots. Given that the existing subdivision is only able to sell 6 lots per year and he will have to compete for the same level of demand, the developer estimates he will only be able to sell one block every 4 months, thus taking 6 years to sell the whole development. At the same time, the existing subdivision will take twice as long to sell due to the new competition.
Given this huge time delay in receiving revenue, the developer may find that the highest price he can pay and still make a profit is below the value of the land as a farm. Even if his price does buy the property, it doesn’t matter how many blocks he puts on the market, the number of sales in the area will be constant.

Indeed the rate of sales also affects how long financing can take, given the requirement for presales prior to lending for construction.  While it may be theoretically possible for discounting to bring forward demand enough to increase returns, but this requires an extreme degree of price elasticity of demand and unrealistic cost structures - it is not what happens in the market.
We can use this example to demonstrate Lesson 4: There is no price competition in land markets. Value is derived from the highest and best use, and there is no incentive to compete on price.

Our developer is still assessing the feasibility of the farm land. He knows he can increase his rate of sales and decrease his risk if he undercuts the prices at the existing subdivision. However, there is no incentive to do so unless it increases his return. If he drops his price by 10%, he may sell blocks twice as fast, but is losing almost 50% of his profit.
But the only way he can decrease his costs is to offer a lower price to the farmer. But this would not be enough to compete with the price other developers would offer knowing the returns from selling at market prices. It never adds up to compete on price.
Imagine that the developer buys the block and demand increases in our hypothetical suburb. Prices increase and the rate of sales of land doubles to 12 lots per year.
Under these circumstances the developers could choose to maintain their prices and attempt to undercut the market, selling all their blocks much quicker. However, this simply provides a gift to the buyers who can on-sell for a profit.
In a market with rising prices there may even be a slight incentive to slow the rate of blocks offered to the market and get higher prices for more of the stock.
Even in a market with low demand leading to falling prices there is no incentive to withhold supply. A developer with a stock of land has the choice to either sell at the market price and rate, or withhold supply to wait for a recovery. But withholding supply in a falling market is the worst choice. Revenue evaporates while the value of remaining stock falls – a recipe for a date with the receivers.
Now imagine the council is comes pressure due to unaffordable home prices, and upon advice from Economists-For-Hire consultants they change the planning code to allow more density.
The two current subdivisions combined have 25 lots remaining unsold. They apply to council to change the configuration of their remaining land to accommodate 35 lots. Because the price per square metre is higher for smaller lots they are now both on track to make greater profits than anticipated. Yet they continue to supply at market prices with sales rates determined by demand.  . Lesson 5: Relaxing planning controls does not change the rate of supply of dwellings, but provides windfall profits to land owners.
Such windfall gains can also lead to gaming by landholders. Knowing that the council is very keen to increase density, the next landholder with development potential has an incentive to wait and see if the council will boost allowable densities once again. Why sell now when it is likely that the council will provide you with massive increase in land value in the near future? This why developers land-bank in fringe areas.
Similar reasoning applies to reducing upfront capital contributions from developers. Since the value of development sites is the residual of revenue minus costs, and reduction in costs increases the site value. This gives us Lesson 6: Benefits from decreasing costs of development accrue to current the landholder, not the final purchaser.
In fact, recent examples show that when the State Government has intervened and ordered council to stop increasing planning density there has been a flood of development sites on the market. Lesson 7: Markets have political expectations.
The final lesson is Lesson 8: Planning rules are not strict. In Brisbane for example, the Cityplan has a three methods for approving development applications depending on the scale of your proposal – self-assessable, code-assessable, and impact assessable. If the scale of your development is within the boundaries of self-assessable limits in your area you can develop without a development application! This means that it is actually impossible for councils to delay such developments.
In Brisbane, it is only when a developer applies for an impact-assessable approval where public notification is required and where long delays from NIMBYs and State Government referrals can occur. This approval process is for proposals that fall outside the scope of the plan, such as requests for greater heights and densities.
The reason that this happens so often is that in order to buy a development site you must outbid other developers who have factored in better outcomes from impact-assessable approvals. It is only the foolishness and overconfidence of developers as a group that increases the number of these more risky, time-consuming and expensive approvals.
The property market works within planning controls to develop land to met demand. But these planning controls merely change the location and type of development to what might have otherwise occurred, but are absolutely necessary to coordinate infrastructure and city planning. While plans can pick winners and losers, most importantly they cannot impact the general price level of housing.
Any questions?
Email ThisBlogThis!Share to TwitterShare to FacebookShare to Pinterest