WEIRD people: Western, Educated, Industrialised, Rich, Democratic... and unlike anyone else on the planet

The Ultimatum Game works like this: You are given $100 and asked to share it with someone else. You can offer that person any amount and if he accepts the offer, you each get to keep your share. If he rejects your offer, you both walk away empty-handed.

How much would you offer? If it's close to half the loot, you're a typical North American. Studies show educated Americans will make an average offer of $48, whether in the interest of fairness or in the knowledge that too low an offer to their counterpart could be rejected as unfair. If you're on the other side of the table, you're likely to reject offers right up to $40.

It seems most of humanity would play the game differently. Joseph Henrich of the University of British Columbia took the Ultimatum Game into the Peruvian Amazon as part of his work on understanding human co-operation in the mid-1990s and found that the Machiguenga considered the idea of offering half your money downright weird — and rejecting an insultingly low offer even weirder.

"I was inclined to believe that rejection in the Ultimatum Game would be widespread. With the Machiguenga, they felt rejecting was absurd, which is really what economists think about rejection," Dr. Henrich says. "It's completely irrational to turn down free money. Why would you do that?" (here)

A recent paper by Dr Henrich and colleagues from the University of British Columbia investigates the psychological differences between WEIRD societies and other societies. In a deep examination of the literature, Henrich shows that while many basic similarities remain common to Homo sapiens, cultural factors play a large role in determining many psychological dispositions. Such differences occur when examining fairness, individualism and cooperation.

For me one standout finding was that the income maximising offer for the ultimatum game (discussed in the introductory quote) was a mere 10% of the total sum for most cultures in the review, while in typical WEIRD cultures a 50% offer was income maximising (see graph below). 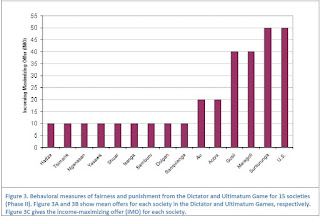 So what environmental factors contribute to the difference?

I have a few suggestions:

1. How many repeated games will be played? Comparisons across cultures need to be certain the whole game is identical, including the number of iterations.

2. Is there a prior relationship (individual or cultural) between the parties? In small societies where every individual is known to every other and may have a hierarchal relationship, the behaviour in the game may reflect this. For example, a younger person may never refuse an offer from an older person?

3. Is the aim of the game communicated properly? For example, if each party is told to ‘get the best result for themselves’ it may fail to acknowledge that sharing of income may later occur, so it is best to accept all offers and later share the spoils.

4. Was the wealth effect considered? If the sum of money at stake was relatively small, there is a very minor loss for risk of pursuing a ‘fair’ outcome. However, if the original sum to be share was extremely high, it may be opportune to accept a 10%, since it is still a substantial payout.

While it is difficult to be certain what factor explains the cultural variation, and whether the experiment itself is representative of normal social behaviour, the results suggests that perhaps societies commonly perceived as individual and self centred, actually have a greater sense of fairness and equality than the more remote tribal societies.

Henrich goes on to examine attitudes of collectiveness and individualism and finds the opposite result – that WEIRD societies are far more individualistic in their decision making whereby they make decisions with consideration of their own benefits and ignoring the broader social benefits.

This conflict between the ultimatum game and individualism is not reconciled in the study.

In all, this type of study highlights that social interactions and consumption and production decisions are far more complex than traditional economics reveals. No doubt the reaction from many economists will simply be that all these cultural variations are incorporated into peoples’ preferences, and that is how they enter economic decisions. Yet there must be a strong feedback between preferences, decisions, experience and back to preferences, which forms the basis of cultural variation, much of which cannot be explained in other ways.

Henrich’s study may very well mark the beginning of a new branch of ‘cultural economics’ that seeks to explain just this dilemma.
Email ThisBlogThis!Share to TwitterShare to FacebookShare to Pinterest