No limits to economic growth

For an environmental economist these words are blasphemous, but I said them, and I have good reason to.
The modern Limits to Growth movement gained prominence with the publication of the Club of Rome’s book of the same name in 1972. This book, by Donella Meadows and colleagues, reports on the results of a computer simulation of the economy under the assumptions of finite resources. The World3 computer model produced scenarios showing that under various assumptions, a decline in non-renewable resources will lead to a decline in global food and industrial production, which will in turn lead to a decline in population and greatly reduced living standards for all.
The following image is one example of the results of their simulations where a catastrophic decline in industrial output, food production and population will result form reaching our finite resource limits. 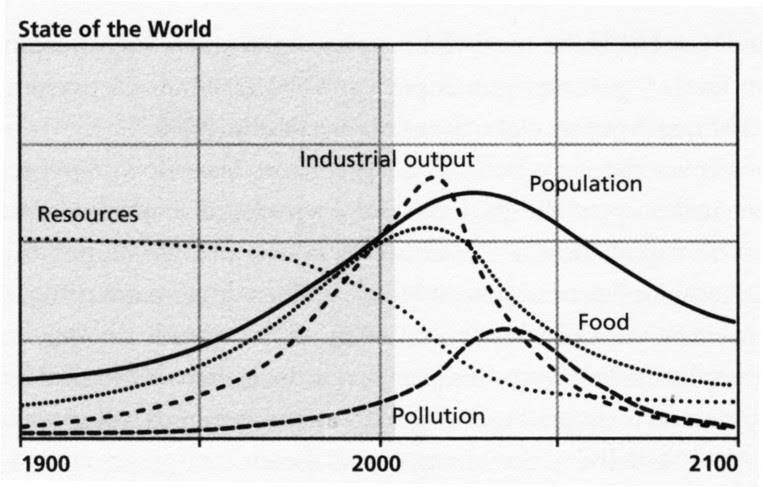 While I don’t doubt the finitude of many natural resources, and that the human population cannot grow indefinitely, I doubt that finite limits of resource inputs to the economy necessarily means that economic growth cannot continue indefinitely.

To be sure, I am certain that substantial unforeseen changes to the rate of extraction of some resources will lead to short-term disruption of established production chains, such as shocks to oil supply, but in the long run I see no reason that an economy with finite resource inputs cannot increase production through improved technology and efficiency.

I need to be clear that when I talk of economic growth I mean our ability to produce more goods and services that we value for a given input. Increasing the size of the economy by simply having more people, each producing the same quantity of goods, will be measured as growth in GDP, but provides no improvement in the material well being of society.

A better measure of growth is real GDP per capita. This adjusts for the disconnection between the supply of money and the production of goods, and adjusts for the increase in scale provided by the extra labour inputs. Even then, this may overestimate the rate of real growth occurring, as there has been a trend of formalising much of the informal economy, for example child care, which is now a measured part of GDP rather than existing as individual family arrangements.

On these adjusted measures economic growth is a very slow process. In a world where non-renewable resource inputs are fixed or declining, it is the rate of the decline and the speed of adjustment that will determine the overall outcome for our well being. If the rate of decline of non-renewable resource inputs is below the rate of real growth (our ability to produce more with less) and the rate at which we can substitute to renewable alternatives, we can avoid economic calamity in the face of natural limits.

Unfortunately there are other factors at play.

The rate of population growth will greatly determine the per capita wellbeing in a time of limited growth. While extra labour input will no doubt contribute to production inputs, my suggestion is that this input will be outweighed by a decline in complementary resource inputs. Remember, we care about real economic ‘wealth’ per capita, and with more people there is a smaller share of remaining resources each person can utilise in production, thus reducing wellbeing.

Further, we can begin to take productivity gains as leisure time instead of more work time, thus there is a possibility of maintaining a given level of production in the economy with fewer labour inputs over time.

There is also the reliance of our financial system on high levels of growth. Many economic growth critics cite the need for exponential growth of financial measures of the economy as being in conflict with any finite system. Yet the ‘system’ itself is a human construction and I seen no reason why a stable money supply cannot operate under various levels of growth (even prolonged negative growth) if used cautiously and with little leverage.

Often forgotten is that many resources are currently fixed and yet go unnoticed. There are always 24 hours in a day, but that doesn’t stop us producing more each day. If a shortage of hours was encountered, would a sudden change to 23hrs (a 4% decline) have a dramatic impact? Or would society easily adjust to this new environment of tighter time scarcity?

While a smooth transition to prosperity under much greater limits on resource inputs to the economy is theoretically possible, I don’t expect this to be our future reality. Self interested governments, businesses and the general public will react to short term shocks in unexpected ways, potentially promoting conflict, and taking the bumpy road. I have no doubt that there will extended periods of prosperity in the future, but also expect a rough ride to get to them.
Email ThisBlogThis!Share to TwitterShare to FacebookShare to Pinterest