Australia’s complicated social security system often leaves me baffled. There are so many forms of assistance for families, with rates of benefit and qualifying incomes changing annually, your entitlement (if any) is sometimes a lucky draw.

What I have noticed is the rate at which these benefits decline as the family income increases. So much so that I instinctively feel that earning a few extra dollars is generally not worth the trouble - unless of course my income was already high enough to be out of the qualifying range for family welfare benefits.

So I took the time to examine situation for Australian families, and it is quite revealing. 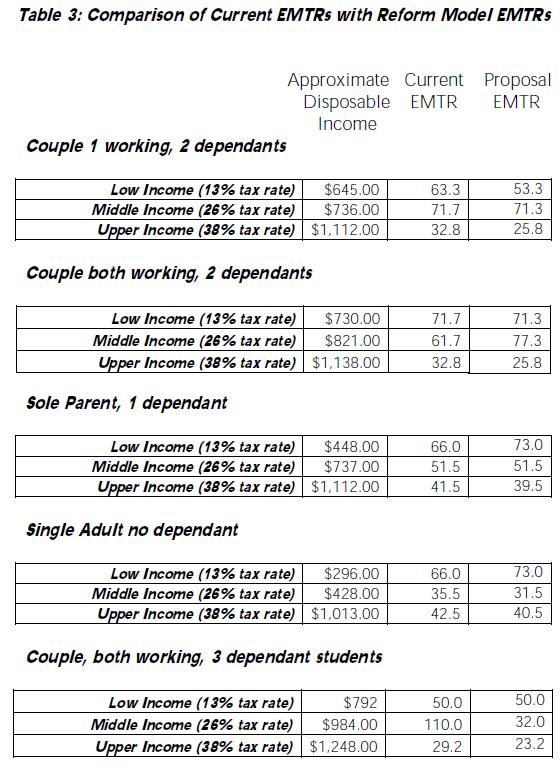 For example, an extra dollar earned by a parent in a family with two dependent children and an income in the middle tax bracket will leave them with an extra 28c in the pocket, while for a high income family, they keep 67c out of any extra dollar.

There are even situations in Australia where the EMTR is greater than 100%! Low income families with dependents on youth allowance have an EMTR of around 110% - for every extra dollar earned, they get 10c less in their pockets.

Unfortunately, I fall into the group with the highest EMTR – families with dependents – where 15% of the group have EMTRs above 70%.

...families with children are more likely to face an EMTR of 50 to 70 per cent than other types of households, due to the accumulation of withdrawal rates for family related payments on top of income support withdrawal and income tax. This is observed even without including the withdrawal of childcare subsidies. On average, the EMTR is highest for couples with dependent children. (here)

In light of this outrageous situation, cutting down to part-time work (4 days/week) provides an extra 48days of leisure per year at a minimal cost to the family.

Also, if we factor in the extra expenses incurred due to extra work hours and time pressure – takeaway meals, remaining child care costs, driving instead of cycling, and splurging on treats because you deserve a reward at the end of a busy day, you quickly see the rational for staying in the welfare trap.

All this makes me wonder just how many families are trapped in high EMTR bands – all earning different incomes, but taking home much the same income ‘in the hand’.
Email ThisBlogThis!Share to TwitterShare to FacebookShare to Pinterest