What does it mean for an economy to ‘turn Japanese’ and what determines whether it will?

What few seem to appreciate, either inside or outside of Japan, is just how strong the resulting Japanese recovery from 2002-2008 was. It was the longest unbroken recovery of Japan’s postwar history, and, while not as strong as pre-bubble Japanese performance, was in fact stronger than the growth in comparable economies even when fuelled by their own bubbles.

How on Earth did Japan manage that with their ageing population and zero population growth? Indeed, Japan outperformed Australia in productivity growth since 2000 and very nearly kept pace with real GDP per capita growth.

The RBA’s Ric Battelino seems confused. In a recent speech on the Australian economy he notes that “the slowdown in productivity growth has meant that GDP growth in the latest decade was not as fast as in the previous decade”, while also saying that for the past two decades “part of the growth came, of course, from the fact that the population grew strongly over the period, particularly in recent years.” What? The data he presents shows a negative correlation between economic growth and population growth, yet he continues to promote a positive relationship.

Australia’s average annual real growth in GDP per capita (currently the best measure of economic performance) since 2000 is 1.28%. While I can’t find a direct measure from the Japanese Statistical agency, using the World Bank data collection I can make a comparison of real GDP growth per capita of Australia and Japan using a common methodology. Using these statistics I find that Australia had a mean annual growth in real GDP per person since 2000 of 1.8% while Japan’s was 1.4%. 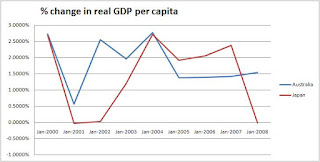 Like Australian situation I described in a previous post, per capita growth appears to be compromised by higher rates of population growth in this sample of data.

Australia’s economic performance is terms of productivity growth looks pitiful in comparison to Japan. Average annual Total Factor Productivity growth since 2000 was a shy 0.47% (including a productivity recession in 2004-05) while Japan recorded a strong 1.77% over the same period (data from OECD here).

Of course there is always unemployment to consider.  The graph below shows that on this measure, Australia is also behind Japan (having been in front for just the period 2007-2008).  Some longitudinal data is here.

Recent research also suggests that Japan’s economic track record was unfairly blemished by asset price deflation followed by short recessions in the 1990s (1993, 1997 and 1998). The graph below (from here - including 20yr data set), shows Japan’s solid performance over the past decade, with their longest boom since WWII occurring from 2002-2008. 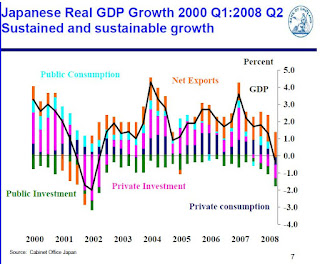 It appears that turning Japanese is not the tragedy it is made out to be by popular economic commentators. Here’s just one example:

As it turned out, Japanese investors lost nominal wealth equal to three entire years' GDP. And the economy today hasn't grown in 17 years or created a single new job.

Nor has the debt been reduced. Instead of permitting the private sector to destroy and pay off its debt, the public sector fought against it...borrowing heavily to try to bring about a recovery. Result: no recovery...and almost exactly the same amount of debt. But while the private sector paid off its debt, the public sector picked up the borrowing. Now it's the government that owes money all over town.

Detractors cite the massive and growing public debt in Japan as a problem, but if denominated in Yen, and with interest rates set at near zero, there is no burden from the debt. In fact, the Modern Monetary theorists would claim public debt in its own currency is never a burden because the government can print money to pay it down. (Maybe the Japanese government prescribes to this theory and keeps the debt as a record of past spending.) 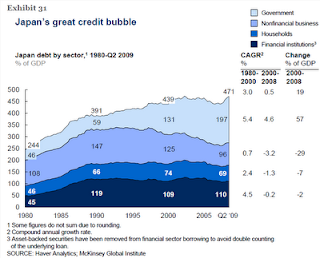 The above graph confirms that Japanese government debt has replaced a substantial portion of private debt since the early 1990s. In my view this is a justified effort to keep the value of the yen stable by maintaining money in circulation - an approach that could be adopted in Australia in the coming decade, with government debt replacing household debt for the same reason.

One must keep in mind that it is probably not the intention of the Japanese government to ever pay off this debt. I am sure they are happy to continue to progress with a high savings rate, high productivity, high GDP, net exports and almost every other fundamental ingredient for economic success.  Turning Japanese appears to be about more fundamental economic prosperity cradled in an unfamiliar monetary framework.
Email ThisBlogThis!Share to TwitterShare to FacebookShare to Pinterest