I have always been puzzled at the assymmetry of 'flation fear'.  A little inflation is good, but a little deflation is a scary thing.

Paul Krugman outlines the general argument as follows:
So the argument that deflation is a bad thing is also an argument saying that some economic problems get worse as inflation falls, and that too low an inflation rate may actually be economically damaging.

For the life of me I can't see how an inflation rate of zero can be damaging in the long run.  Also, if we look at Krugman's argument in reverse, more inflation is better.  Why isn't the optimal inflation rate zero instead of some positive number? Why 3% instead of 10%? Do human have an inbuilt behavioural trait that only we are able to plan and invest knowing that currency in the future will worth less rather than more?

And he concludes that even if deflation is bad, it is easily solved.
Even if deflation is a bad thing, we know how to solve it. Print enough new money and people will eventually start spending it. It’s alleged that no matter how much you print, it can all just fall into the liquidity trap, and it’s alleged that this is what happened in Japan over the past decade. But I am sure the Japanese just didn’t try hard enough. Liquidity trap or not, I guarantee you there’s a central banker in Zimbabwe who knows how to fight deflation. If we really get into trouble, all we have to do is hire him.

As I have noted before, the world survived just fine for a long period of time with inflation at zero on average. Positive inflation in the long run did not occur until post WWII. Some might even argue that this is simply the longest ever business cycle stimulated by enough debt to keep inflation positive, and that the next fifty years, subject to international politics, might see prolonged deflation. 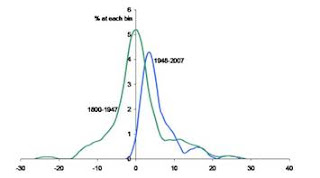 Avoiding deflation in the short run may have made the global economy far less stable in the long, long run.

Maybe it is just that with high debt levels adjusting to deflation from a persistent inflationary environment will unsettle much investment, and mean a transition period were many jobs are lost.  Any thoughts?
Email ThisBlogThis!Share to TwitterShare to FacebookShare to Pinterest