Living in a bubble

Morgan Stanley’s Gerard Minack aptly uses the phrase ‘living in a bubble’ as the title of his research note about Australia’s housing market. Minack’s conclusion is that Australian housing is overvalued, but he sees prolonged stagnation rather than a dramatic pop of the price bubble - I expect that the real returns on residential investment will be negative over the next decade.

I want to highlight a few key charts from the research note. The first is a comparison of prices to rents, showing a massive increase above the long run average since 2000 (I believe this figure is price divided by annual gross rent divided by 100). One could call on interest rates as an explanation, but mortgage interest rates have actually been increasing over much of that period. 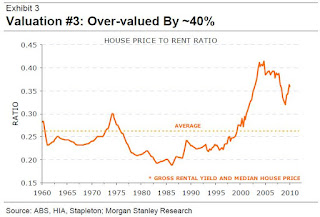 The second chart is a comparison of the value of the housing stock to household income, which further supports this claim that home prices are 30-40% above average levels. 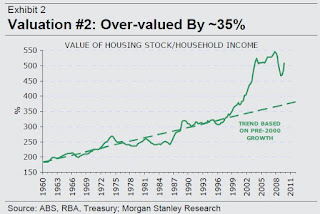 The next chart is one that compares the share of household debt by income level. One of the RBA’s claims has been that Australia’s housing market is stable because most debt is held by high income earners - ...our assessment is that the increase in debt has broadly been concentrated in the hands of those generally more able to service it.  This is identical the the US situation in 2007. 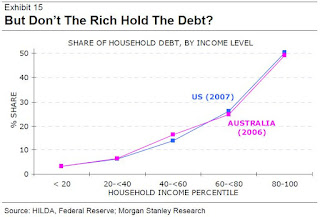 The next interesting chart shows the degree of speculation embodied in market prices for housing. There was a strong change around 2000 where losses being made by property began to increase.  This is not attributed to rising costs, but to rising prises. Gross rents and costs follow a very stable trend, while interest costs, due to higher prices, lead to the current extremes of negative gearing losses. Minack highlights the boom in number of negatively geared property owners, further supporting Leith van Onselen's findings on negative gearing - negative gearing cost the Government around $2.6 billion in foregone tax revenue in 2007/08, meaning that average Australians are massively subsidising property investors. 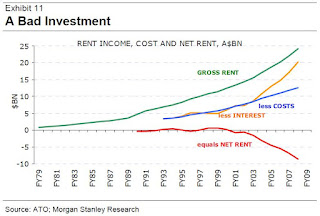 The housing undersupply and shortage myth (that somehow high prices are the result of poor government planning and delayed infrastructure provision) is exposed by the following graph. If such supply side constraints really could explain prices, we would expect to see city prices climbing much more than in regional areas. Alas, this is not the case, with almost identical price gains in the past 15 years. 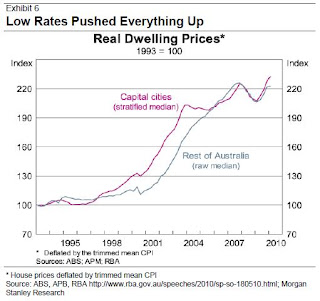 Finally, a graph that makes the point that when it comes to house prices, what goes up normally comes down. 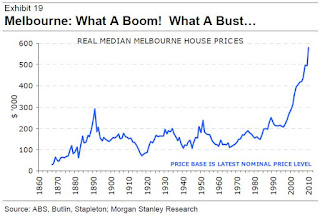