Helmet laws hit the headlines with a new Australian study proclaiming their ineffectiveness at providing safety to cyclists, while in Canada the debate is heading the other way (due to this study - sorry I can't get the full text to review the methods).

The Australian study neatly controls for the number of cyclists and distance cycled by comparing the ratio of head to arm and hand injuries resulting from cycling activities from hospital records. A change in this ratio (lower head injuries per arm and hand injury) would be a clear indicator of the success of helmet wearing in preventing head injury. 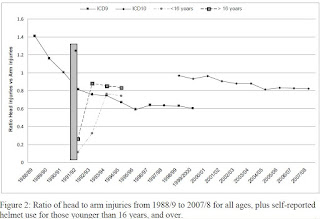 The essential argument is that the large decline in the ratio of head to arm injuries occurred before the helmet law, and much before compliance with the law. In the two year period where helmet wearing took off following the legislation (1991 to 1993), the ratio dropped from 0.8 to 0.75 – hardly a success. The drop in the two years preceding the helmet law was from 1.15 to 0.8.

The author suggests that other road safety measures contributed to the decline, while the law itself would have contributed to a decline in the number of cyclists (some evidence for the decline is here) which itself made cycling more dangerous and lead to a flattening of the trend -

The reduction in numbers of people cycling may have actually increased the risk to the remaining cyclists because of Smeed’s Law and the safety in numbers hypothesis.