The shrill from commentators warning of Australia’s apparent skills shortage is deafening. But there are a number of reasons why this claim, and the inevitable recommendation for government to increase quotas of skilled migrants, is flawed, and why the solution is not in the best interests of Australia in the long run.

For the acute observer the transparent falsehood of the claim jumps right out at you.

… skilled labour in an area like project construction is an international problem, so poaching what we need from overseas is not going to be easy.

ACIL Tasman points out that LNG project specialist workers are globally mobile, moving from site to site (and often between projects at varying stages of development) – wherever their services command the highest price. As the consultants warn, opting for less-experienced personnel carries with it the dangers of higher error rates in construction and resulting delivery delays and still more expense.

Translation: if you want the skills you need to pay.

A government with backbone, and an eye on long term prosperity, would tell industries crying poor to sort it out themselves. Large mining and gas projects have very long lead times - long enough in fact to train some of the existing workforce in skills that may be required for future projects. If you need the slam-dunk of skills and experience, you are inevitably poaching people from another project - experience only comes from a finite number of places.

LNG project specialists, discussed in the linked text above, can only develop specialised skills and knowledge of LNG projects by actually working on LNG projects. A company aware that the industry is expanding rapidly would be wise to have succession plans and internal training programs in place to plan for this highly predictable competition for workers.

Domestic companies have numerous options available to ensure adequate skills are brought to a project, but costs are kept to a minimum. Labour efficiency could be improved through improved task delegation for example. Administrative tasks can be time consuming, and an administrative assistant could be shared amongst a few technical people to greatly improve their productivity. Other technical innovations may also be possible in addition to the paying more to attract Australian workers back from abroad.

What is most bizarre about most of the skills shortage claims is that there is never a mention of salaries. In claiming any shortage in a market economy, neglecting prices will undermine your analysis. Furthermore, a recent study suggests that immigration itself can accentuate the problem:

Government intervening to increase immigration quotas of skilled workers results a number of problems. First, governments inevitably pick winners and losers. The industry that lobbies hardest to get their skills on the list can expand without having the added cost of paying their technical people higher salaries. It also raises the question of why we should limit immigration quotas to highly skilled people. Wouldn’t letting anyone through the door keep the wages of unskilled people down as well? Wouldn’t that also keep inflation down, and interest rates low? At least that’s the argument of one infamous spruiker.

Second, and in my mind more important for the long run, people who invest the time, effort and money to acquire skills need a return on that investment. Why would I spend over $100,000 and seven years of my life studying to be a doctor when I will end up earning the same as a plumber? Not until I have invested more than ten years of training into a specialisation will I end up charging a premium for my time. Acknowledging the importance of this return to education highlights a key feature in labour markets relevant to this debate.

Part of the return on education investment for Australians is the opportunity it creates for working abroad and earning a much higher salary. Doctors can easily be attracted to work in the US or the UK or for those with linguistic skills, continental Europe. The same applies for doctors and engineers from India and South East Asia. Their investments in education have opened the door for them to come to Australia. Put simply, skills in demand get raided by countries that can offer better pay and quality of life. Australia is a middleman in a global game (and our departures statistics confirm this - apologies for the age of this data). 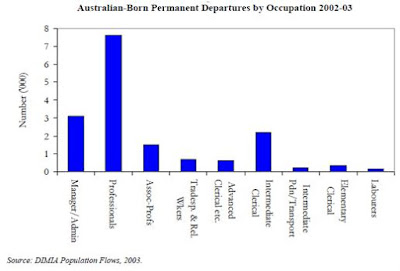 This global competition for skills is no secret. A 2004 Senate inquiry into the ‘brain drain’ was commissioned in order to understand the problem better.

Many of these expatriate Australians are young, well-educated, highly skilled, and keen to see the world and to make the most of the opportunities presented to them. This has led many to fear that Australia is experiencing a ’brain drain’ of its best and brightest workers, with damaging consequences for Australia’s economy and society.

A key finding of this research was that Australia is in fact experiencing a ‘brain gain’ – more highly skilled workers were arriving rather than departing. Unfortunately, this simply supports the argument that returns on education for Australians are far greater if they move abroad, and that our skilled migration system is providing returns for those educated in less developed countries. If we continue to perpetuate this shuffling of skills around the globe, Australia will always struggle for skills and may become completely reliant on imported skilled labour.

We do have an advantage though. Educational services are one of Australia’s biggest export industries. Our universities are full to the brim, but not with local students keen to pursue careers in Australia. Foreign students and those looking for returns on the education investment abroad are becoming more common – the incentives are stacked in their favour. We need to attract domestic students and then keep them here to retain and grow our skills base in the long run.

While this is quite clearly a chicken and egg problem (did we need to attract skills because skilled Australians were leaving, or did they leave because we imported so many skills and decreased their domestic returns to education), a government, if it had the will and the backbone, could incrementally step back skilled migration quotas and other sponsorship arrangements, thus forcing salaries higher and temping some of these Australians home, and many more into our universities.

As a member of this group of relatively young and highly skilled professionals I can attest to the growing numbers attracted overseas by high salaries and fashionable lifestyles. There are apparently more than one million Australians living abroad, and a large proportion of them have taken the skills they acquired at home on the road. Because of the higher salaries, having skills in demand can offer a far better lifestyle even in the most expensive cities in the world. My network of friends and family here in Brisbane is diminishing by the month as the world tempts them away – will I be next?

Remember, well being is not about how much business is in your country, or how quickly you can dig things out of the ground. Well being is reflected at the level of the individual. One key aspect to this the real wage, or how much stuff you can buy with an hours work time. In the long run this key measure will improve if we can train and retain highly skilled people who will be driver of future productivity improvements. In the short run, businesses will need to adjust their operating structures to more effectively utilise these necessary skills as their wage premium grows. Immigration is not the problem here, but twisting the composition of new Australians in favour of those already possessing skills simply exacerbates the ‘brain drain’ and reinforces a reliance on imported skills.
Email ThisBlogThis!Share to TwitterShare to FacebookShare to Pinterest