Effects of dwelling composition in the property market

Much popular property market analysis based on flawed principles.  A secret to identifying rubbish analysis is to note the following meaningless buzzwords and phrases; underlying demand, housing shortage, urbanisation or population growth.


These buzzwords are based on a fallacy.  The problems they have in common is that they are quantity based (thus ignore prices), and they ignore changes in the composition of dwellings.

Commentators calculate underlying demand by dividing the quantity of population growth in a given period by the average occupancy rate.  This is supposed to give a measure of quantity of dwellings that ‘should’ be constructed of the period.  Unfortunately, the occupancy rate itself changes over time.  It has been declining dramatically for three decades.  If the trend continues we may soon be able to calculate a housing shortage even if we build a new home for every new person!

Calculating a ‘housing shortage’ is then a simple matter of subtracting the number of dwellings constructed over a time period from the underlying demand.  The graph below shows the result of this calculation for Australian from 1994 – 2009 using quarterly data (and the occupancy rate at each quarter – not the current occupancy rate). 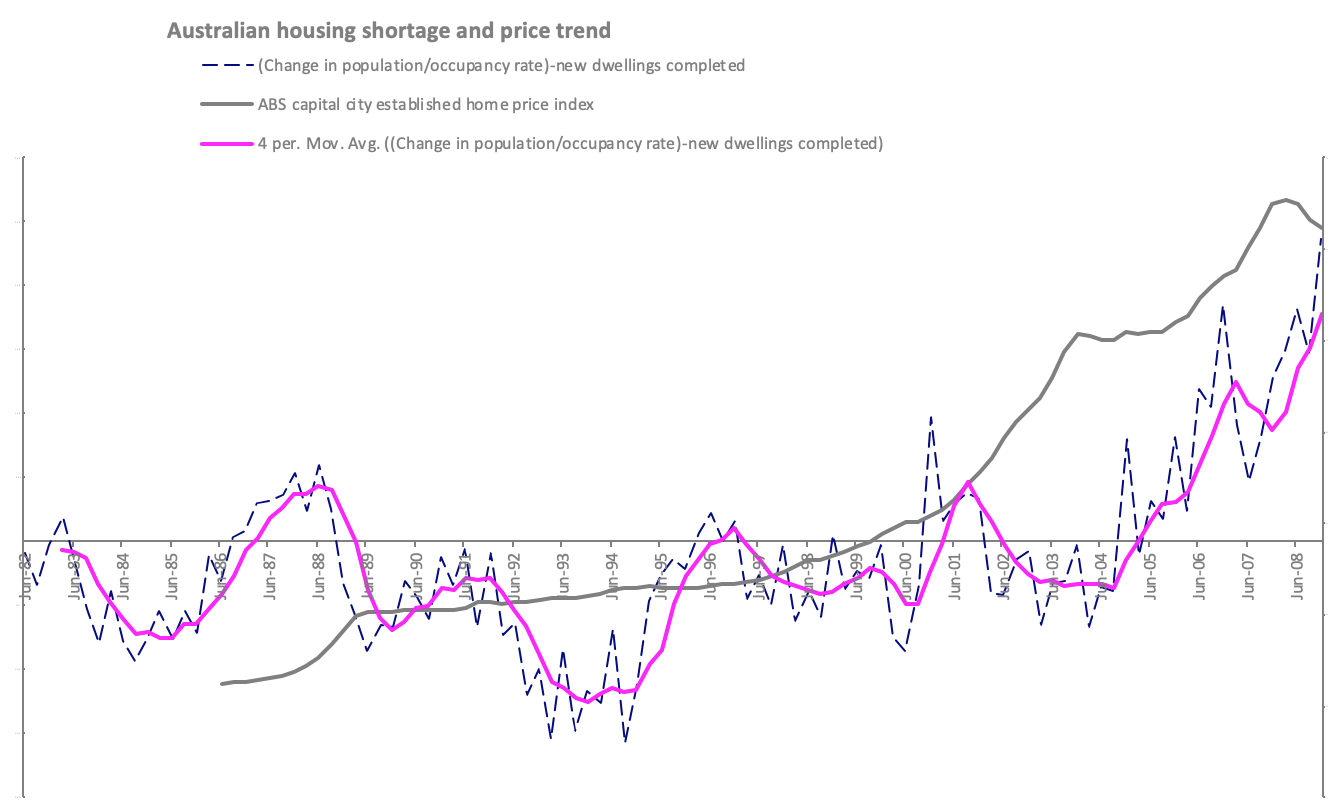 Spruikers use this measure to justify the likelihood of price gains, yet the price changes observed seem to in fact be inversely correlated to underlying demand.  We had a price boom from 2002-2004 at the same time as a housing surplus!

These measures also fail to acknowledge the heterogeneity of housing.  Counting a studio apartment and a 5-bedroom house as equal in the calculation of a housing supply is a mere fallacy.  Clearly these two different dwellings will house different numbers of people.

Furthermore, the size of existing homes changes over time with renovations and extensions.  It has been widely acknowledged that many home owners have chosen to renovate instead of relocate in their search for more spacious accommodation.  It is easy enough to imagine a street of heritage homes, for example, being renovated and extended to allow a large increase in the population of the street.  No new homes, plenty of new people, and no housing shortage.

What we have seen in the latest property boom is a continuation of the trend to build larger homes with more bedrooms, while the occupancy rate continued to decline.  At some point you would expect the occupancy rate to bounce back before we all ended up living alone with three spare bedrooms.  And it did.

The ABS summarises the long-term change in dwelling composition and occupancy as follows:

Important demographic reasons explain why we should expect the declining occupancy trend to come to an end.  The aging population including baby-boomers downgrading is a key way in which this will occur (others include a rise in share housing by the forever young Gen-Y who are delaying family formation).

For example, the parents of a family whose adult children have moved out with friends or partners might find that the upkeep of a large house conflicts with their ‘grey nomad’ retirement plans.  They can sell their 5-bedroom house and move into a new 2-bedroom unit, pocketing the price difference for their retirement.

In this scenario, the construction of a 2-bedroom apartment resulted in a 5-bedroom home being available to meet the housing needs of population growth.

The final fallacious buzzwords that provide property bulls justification for their position are urbanisation and population growth.  If we were discussing any other good or service the pattern of habitation would be of little consequence to the expected prices.  Increased urbanisation doesn’t drive up the price of food, petrol or any other goods – nor does population growth.

Increased urbanisation can lead to increased land prices, but that doesn't necessarily lead to increases in median housing price measures due to compositional change.  Because new dwellings in outer areas are typically inferior locations to existing homes, the prices one would expect for identical dwellings in new estates would be lower.  Since there is more land at the fringes of cities, we would expect that proportionally more cheaper dwellings to be added to the mix of housing.  Prices for existing homes can rise, but due to the greater proportion of housing in outer areas in the mix, a price index can remain flat at the same time.

The table below shows a hypothetical city made up of identical dwellings, where new supply is mostly added at the fringes.  Even though the price of each individual dwelling increases 10% over the period, a city-wide mean price index would remain flat due to the greater proportion of cheaper dwellings.  The same effect can happen with new apartments in traditional detached housing areas.

Also constantly overlooked is the fact that urbanisation can only occur AFTER new urban dwellings are constructed unless driven by an increase in occupancy rates.  Until the end of 2005 prices was rising fast, urbanisation and population growth were occurring, but the occupancy rate continued to decline.

Analysis of the property market should focus on returns in comparison with other investments, with renting (user cost approach), and historical returns.  Counting dwellings, and implying demand from population growth or urbanisation is problematic due to compositional factors.
Email ThisBlogThis!Share to TwitterShare to FacebookShare to Pinterest