I have written at length on why population growth does not improve welfare. Mark Crosby over at Core Economics reiterates these fundamental arguments. 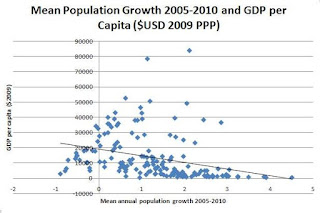 Food myths are widespread. The environmental movement wants us to believe that vegetarianism is better for the environment and that ‘organic’ (what does that mean?) food is more nutritious and can solve hunger around the world. The agricultural lobby would have us believe that food self-sufficiency is of utmost importance, although their argument is shallow at best.

The latest myth to be busted is that chickens are pumped with artificial hormones and steroids to make them grow faster and larger. However, it appears that hormones are not part of the poultry picture at all.

While I firmly believe that raising animals for food should be conducted in a humane manner, those who push for change would garner more support if they were fully informed of current practices - their message could then be taken seriously by industry and government. Furthermore, the organic food movement could concentrate on promoting farming practices that reduce externalities, as a result of chemical use for instance, and improving land quality. The incentives for such change often align with the long term goals of the agricultural industry and may attract wider public support.

Under the rebound effect banner I have discussed how some innovations to improve safety can backfire if peoples’ behavioural response is to take on more risk. For example, the vigorous uptake in sunscreen use has led to a culture of sun exposure, offsetting the intended consequence of reduced skin cancer rates. The name for this behavioural response in the context of risk taking is the Peltzman Effect.

You can find this type of response in broad range of situations. Most recently, in trials of automatic lane correction technologies in cars, one participant noted:

...that she would love to have this feature in her own car. Then, after a night of drinking in the city, she would not have to sleep at a friend’s house before returning to her rural home

The business lobby loves the textbook response to minimum wage laws, but even world renowned economists are sceptical.  No doubt this debate will continue.
Email ThisBlogThis!Share to TwitterShare to FacebookShare to Pinterest