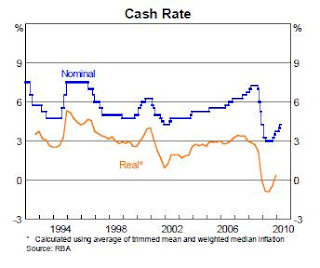 The Reserve Bank has lifted its stimulatory cash interest ratesetting and showed a willingness to continue to tighten monetary policy if required. At the same time, the Federal government continues to spend into the economy with its Nation Building Economic Stimulus Plan. The RBA started contracting their position when the Government was only half way through its rollout of fiscal stimulus. All data upon which the RBA acted was severely affected by the $25billion spent into the economy as part of the Plan. That’s not forgetting the $17billion still to go in 2010.

Unfortunately we have yet to see what is left of the ‘real economy’ once this artificial situation expires.  But at least the RBA has proved their independence.

The Nation Building fiscal stimulus package is bringing forward government spending – the exact opposite of what the RBA is trying to do. The remaining $17billion being spent this year will offset the last 3 interest rate increases – each 0.25% rise increased the interest on Australia’s private debt by $4.8billion/annum; money which would have otherwise been spent on present consumption or investment (of course I have overlooked the impact on savings rates in this calculation).

My gut feeling is that the RBA was far more confident then it should have been, and we may see a repeat of the dramatic change in policy that we saw at the end of 2008 when the cash rate was more than halved in a few short months.  There might be some money to be made in foreign exchange - I expect the AUD to decline between now and the end of 2010.  Another forecast to be tested.
Email ThisBlogThis!Share to TwitterShare to FacebookShare to Pinterest