Why the next interest rate move is down

Most economists predict another rate hike by the RBA. I am not like most economists and predict the next move will be down. My reasoning is founded on the unfortunate necessity to maintain housing values in order to avoid serious disruption to our financial system. The RBA will move strongly to reduce the interest burden on debt should they see evidence of a fall in house prices (aka values). The following snippets are therefore worrying for the RBA:

1. The term deposit rates peak at 6months for most major banks, while yesterday we saw a number of banks lower their term deposit rates even further
2. Beijing real estate recorded its first price decline last month and a massive decline in sales volumes
3. Australian mortgage approvals have plummeted
4. The CBA is tightening lending standards

The graph below (courtesy of one of my favourite websites) shows a pretty clear relationship between asset prices and the willingness to take on debt. This time however we have more foreign money chasing our housing, so maybe the effect will be subdued. On the other hand, this could be the start of the ‘correction we had to have’. 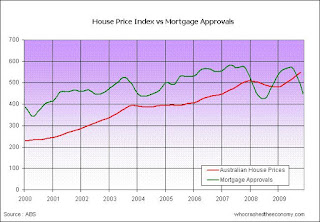 My prediction is that the RBA to keep interest rates stable until evidence of price declines becomes more vivid, in which case they will make another round of severe cuts, all the while losing credibility.
Email ThisBlogThis!Share to TwitterShare to FacebookShare to Pinterest