I find it interesting that prudent advice for gamblers is to risk only your own money, while for investors it's a different story - the more leverage the better.  But there must be an optimal level of leverage, otherwise we would all simply continue to borrow and destroy the value of the currency through money creation.
Given the realities of our world, one would expect that leverage below this optimal level would not persist for an extended period, as people would begin to notice the advantages of more leverage, nor would leverage or debt beyond this optimal level be able to persist.   It is therefore interesting to ask how would we know if we are above this optimal level?


One could easily spend some time on Steve Keen's blog and be convinced we are far beyond that optimal level, and that downwards adjustment in debt (debt deflation) will take place, which will result in a destruction of asset values, particularly property, which is usually purchase with high levels of debt.
The path I want to take is to first look at Australian historical data to paint of picture of where our debt situation is relative to assets and incomes, then compare household debt levels internationally to see whether a correlation can be drawn between high debt levels and a property market crash.
Below is data from the RBA B21 time series on household ratios.  It demonstrates a number of interesting points for the investor gambling with more than their money. 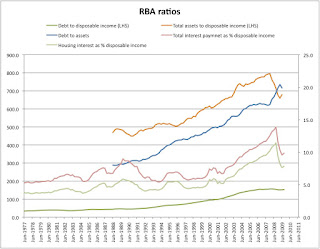 The first critical point to note is the rapid destruction of asset values from mid 2007 to mid 2009 - asset value on paper is always at risk until the asset is sold.
The second point to note is that during the value destruction, the debt to asset ratio shot up dramatically (as you would expect).  The lesson - debts are fixed while asset values are not.
The third point to note is the effectiveness of monetary policy in decreasing the burden of debt.  When interest rates where reduced during 2008, the interest costs dropped almost 50%.  However the downside to low interest rates is that it enables people to borrow more and makes raising rates again more painful (although the RBA seems to have no problems with that, unlike their American and UK counterparts).
Can we tell from this information whether we are above the optimal level of debt?  The only worrying thing I see is that the housing interest to disposable income ratio is still far above any level experienced before the recent property boom.  I suspect that even though the RBA appears to be in a tightening phase, by year's end we will see lower interest rates than at present.
The second graph below (from here) shows a fairly recent international comparison of household debt levels as a ratio of disposable household incomes.  What we note is that all countries with debt levels above 150% of disposable income have seen property market crashes (of differing severity) since this time.  The Dutch may yet be in the midst of a property market correction.  Prices in major Dutch cities are between 1,900 and 3,360euro/sqm which, quite unbelievably, are much the same as the apartment prices in Brisbane at the moment ($3,000-$5,000/sqm).  Further, as I have mentioned before, interest rates on home loans in Holland are around 4.5%, and the interest own your own home is tax deductible.
A second interesting feature is the flatness of Japan's debt ratio since the late 1980s.  Japan never saw debt levels as high as those currently observed in Australia and yet the central bank decreased interest rates to near zero since the time of their property market peak in 1990, decreasing the burden from this debt, but failing to significantly reduce it. 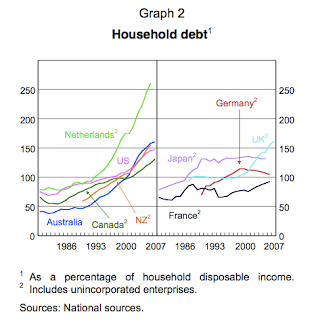 The take away message from these two sets of data must be that some form of property market correction will occur.  Whether it takes the form of static prices for some years, or some sharp drops, price increases such as those seen since 2001 will not be a feature of the coming decade.  At the moment, Australian households appear to be ignoring the advice given to gamblers, and are using high levels of debt to invest at a market with plenty of unknowns, and plenty of risk.
UPDATE
More here on Australian household debt, although I disagree with the prediction on interest rates.  I see interest rates lower by the end of the 2010.
Email ThisBlogThis!Share to TwitterShare to FacebookShare to Pinterest