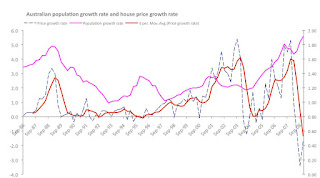 The first chart (above) shows the rate of population growth (RHS) and the the growth in the ABS capital city price index (LHS).  There are two important things to take away from this chart.
1. The rate of population growth can change very rapidly, and extrapolating past trends will always miss changes to this rate.
2. There is no significant relationship between these two figures over the period.

Either way you take it, invoking population growth to explain house prices is inherently misleading - why not simply price level and population level?

The second chart (below) show the ABS capital city price index in real terms, and the NSW median household income in real terms.  After the 1980s boom, the house price index did not recover its real 1989 peak until 1998 - a period of 9 years with no real capital gain. 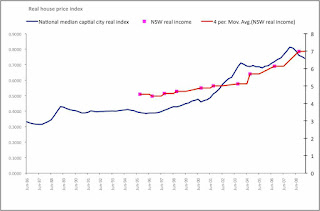 What the data misses is that during this 9 year stagnation, the quality of homes, in terms of size and location, was probably improving.  A hedonic index (such as the RPdata-Rismark index), had one been around at the time, may have shown and even lower real return, or in effect, a longer period of stagnation.

What is also interesting is the significant change in the ratio of prices to income since the late 1990s, even though Australian mortgage interest rates have been relatively stable since about 1996 (between 6 and 8%).

So what does it all mean?

Essentially, we are in for either a long period of stagnation in residential property prices, or, if my predictions of a W shaped financial crisis are correct, potentially a severe short term decline in prices with a very slow recovery.  Of course, the RBA has plenty of interest rate ammunition should another crisis precipitate.

Time will tell, but my advice (if you want to know) is that potential home buyers, especially first home buyers, should be in no rush to get into the market.
Email ThisBlogThis!Share to TwitterShare to FacebookShare to Pinterest