Some empirical support for land economics

There has been a paper recently published by Andrew Leigh, Economics Professor at ANU, which empirically estimates the impact of stamp duties on the housing market. I found out about this paper through Chris Joye’s blog at Business Spectator, although I regularly read the Core Economics blog, where it was also linked with some added thoughts from Andrew. I mention this only because I have now been involved with discussions about the paper at these sites.

I need to quickly summarise Leigh’s findings before moving on to the important theoretical and political implications.

His main finding is that if stamp duties are raised, house prices will fall by more than in the increase in the tax. Did you get that? If you increase stamp duty, the total price of housing (price plus stamp duty) will fall. Sellers suffer, buyers benefit. It’s a classic land tax - there is no deadweight loss, as shown in the figure below. 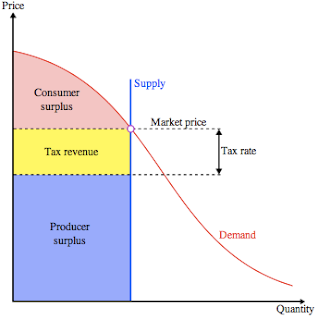 How can such a thing occur? For any other product, assuming a competitive market, if you add costs to production, prices will have to go up (even if quantity sold goes down), or margins will go down (temporarily at least).

Land, however, has some characteristics that make it quite different from other goods
Some would argue that land available to be developed is not in fixed supply, and that town planning regulations can change that supply. I agree. But these are regulations, they are not market players, and that does not make the supply of land price elastic (although I would suggest the supply curve for serviced residential lots above the intersection with demand is quite elastic as land parcels are brought to market). I think both sides would agree that from a theoretical standpoint, the supply curve is vertical below the intersection with the demand curve.

It is the second point that is far more important to understanding the land market. Land itself is costless to produce. That means that the level of demand determines the price of land at any point in time. Not supply, demand. So when you increase a tax on land the total land and tax price stays constant, but the underlying value of the land declines (as shown by the reduced producer surplus in the figure above).

I have been quite baffled by the success of Christopher Joye’s argument that the supply of housing is a major factor in determining prices. He maintains two contradictory positions. The first is that we have a land price boom, not a house price boom. The second is that we should elastify the supply of housing to avoid further unnecessary price increases. Hang on chap. We don’t have a problem supplying housing. Our problem is that we all decided to pay ridiculously high prices for land.

There are two more characteristics to the land market that make analysis difficult. There is competitive behaviour in the market for buying land, both development sites and serviced land parcels, but not a competitive market for the sale of land.

Once a serviced land parcel is developed, there is no price competitiveness exhibited when selling to the final consumer market. The problem with land is that if prices fall, they can gather momentum as people sell to avoid further falls. Also, if developers seek to undercut the market price, it reduces the value of all their other land holdings. There is no incentive to release below market prices.

I also believe Leigh’s findings shed some light on my argument that changes to town planning rules, including increases in height limits and allowable building area, does nothing to affect home prices. Any site with increased development potential will fetch a higher price, and the resulting dwellings will be released at the market price.

While Leigh’s paper is just one simple analysis of stamp duty rates and house prices, the theoretically sound finding should put to rest some of the illogical arguments of the supply side warriors, and the property development lobby in general.
Email ThisBlogThis!Share to TwitterShare to FacebookShare to Pinterest