Ever heard of the Elliot Wave Theory? Maybe you have, but I hadn't until last week. Put simply, this theory suggests that markets behave is a predictable way which is not driven by fundamentals (actual production of goods, actual jobs, etc) but simply by human behaviour in the marketplace – the collective investor psychology. 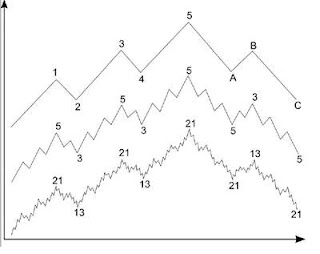 While quirky (as an economist I like to think in terms of the fundamental patterns of production) this theory has a lot going for it.


1.  It is fractal and scaleless. That is, the pattern reoccurs over very small and very large time periods.
2.  The theory enables bulls and bears to be correct much of the time. It goes up and down.
3.  It seems irrational and predicable – a good reflection of human behaviour.

However there are some problems.

1.  It is impossible to be wrong if you simply say the market will go up and down (the most basic claim of this thoery).
2.  The theory has nothing to say about the speed and scale of each wave; it therefore does not add to the forecasting arsenal.
3.  It assumes that markets ignore all political and technological change, or it assumes these things change in a wave pattern.
4.  It assumes that markets actually measure something. Should Elliot wave analysts use prices in real terms or nominal terms?

So where are we on the basic wave formation? Did we just have a 3-4 crash, or a 5-A crash?

I have a chart of the All Ordinaries index from 1985 with my amateur attempt at using Elliot waves to forecast the next market move. Umm… down maybe? 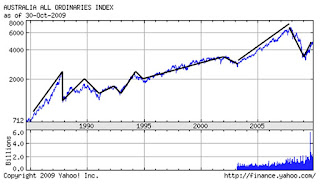 While interesting, how anyone uses actually applies this theory to reveal anything useful escapes me. You can read up on Elliot wave analysis of the current market here, or do a google search for commentary by Robert Prechter, the current guru of Elliot waves.
Email ThisBlogThis!Share to TwitterShare to FacebookShare to Pinterest