The value of food security?

Food security, energy security, job security - all political terms that conjure up emotion, deliver electoral support, all the while remaining devoid of meaning.

I have been asked impossible questions in my job. But one comment recently sticks in my mind. It goes:

..there must be some data that they could have used to address the “value” of having future food security.

What value might that be? Do you want a dollar figure that represents the present value of all future value streams from having food security? And do you imply that food security means that Australia remains a net exporter of food?

Wikipedia provides a fairly detailed, but useless, entry on food security. It does not mention national self-sufficiency at all, but merely one’s access to nutrition, and the link with poverty. No surprises there.

I’m all for national pride, but arbitrarily deciding that a country must be self-sufficient in one particular good is a poor philosophical position. If we replaced food security with toilet paper security, or car security, or hat security, we would immediately reveal the absurdity of the argument.

I can hear you saying that food is different. Food is essential to life. Yes, and shelter, clothing and energy are fairly important as well. What if, you say, we were a net importer of food and the countries selling us food products decided not to sell them anymore as an aggressive action for political gain? Well, the response would be simple.

1. We would look to other trading partners for food
2. Price increases would encourage more land to be devoted to farming
3. Diets would change to those foods more easily grown domestically
4. Governments may step in to subsidise farming

This is the beauty and resilience of markets. We do not self-sufficiently produce so many important goods, including energy (another political drama there), but seem happy enough to do so. Indeed, we would never expect to be self-sufficient in other areas.

If reliance on other countries for food was a problem, wouldn’t we see evidence that those countries currently importing food are suffering? The graph below shows the proportion of exported agricultural production against agricultural subsidies for selected OECD countries (produced for another purpose with data from here). The net food importers, Japan, Iceland, Norway, Korea, Switzerland, Mexico and the EU seem to be functioning perfectly well. They have food security in the Wikipedia sense, but not food security in the self-sufficiency sense. The food exporters, Canada, US, Turkey, South Africa, Australia, Brazil, and New Zealand, appear to have both forms of food security, although they all still import significant quantities of food, as they specialise in those agricultural commodities that are more suited to their environments. Even they don’t produce the variety of foods to satisfy the dietary desires of their own citizens. 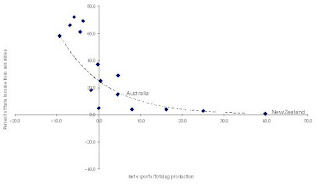 My question is this. When will the public see through the farming lobby's cries for support to ensure food security?
Email ThisBlogThis!Share to TwitterShare to FacebookShare to Pinterest