I declared in July that the turning point in thinking about climate change has arrived. Now it seems one of the world's most renouned climate modelers is questioning the validity of the climate change hypothesis (here).

You see the thing is, complex systems results in perculiar outcomes, and can violently change without apparent reason. I have written in the past that I think N.N. Taleb covers the topic well when he talks of Black Swans. Extrapolating the past does not predict the future.


Let us look at some relevant examples. Recently, the population growth predictions from the Treasury were revised upward. But I wonder what the logic behind this revision might be. What new information could change significantly a previous prediction of a century of population growth?

My suggestion is that they make the mistake of extrapolating the past to predict the future. Let's imagine we are Treasury in 1988, and that we have just witnesses population growth like in the graph below. 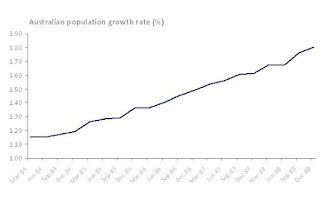 Wouldn't it be obvious that we should be expecting higher growth in the future? Be if you knew the causes of this growth you could predict that the trend would not continue. It would certainly decline again. And it did. 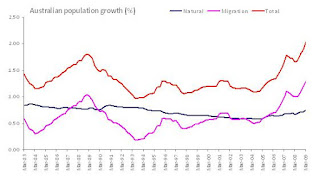 So I imagine that the current boom in population is the result of two main factors - increased skilled migration, and the baby bonus. The increase in skilled migration could decline drastically at any moment upon political will. Of course, if the douple-dip downturn eventuates, this is more than likely to occur.

Additionally, the increase in natural growth due to increasing births in recent year - the baby bonus children - are likely to be the result of couples bringing forward their decision to have a family. Thus, this little boom is likely to fade quickly as all the number of remaining fertile young couples who desire children drastically reduces. I would hope these underlying points did not escape the Treasury.

Put simply, in complex systems, the longer period of time we consider, the more likley we are to gain insights into the behaviour of the system.  My bet is that the rate of population growth will fall significantly from this peak over the next few years.