The main problem with the housing shortage proponents is that they neglect the existing 8.5million or so existing residential dwellings as a supply of housing. Currently, the average dwelling occupancy rate across the country is 2.53 persons/dwelling. This rate has varied between 2.48 and 2.60 over the last 27 years. In fact, it peaked at 2.6 in 1982 (soon after the second oil crisis). The graph below shows that we are currently heading back to level of occupancy last seen in the 1980s. 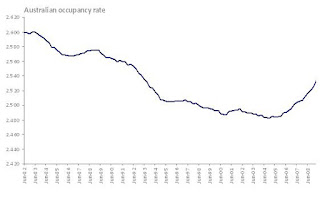 But surely, with such a small variation, this issue is minor compared to the 17,000 homes we are currently short of! On the contrary, it is the crux of the whole debate. You see, a change in the occupancy rate occurs for all dwellings, including the 8.5million existing homes. The 43,000 people apparently in need of the 17,000 dwellings can be accommodated in existing dwellings, and the result would be a shift in the occupancy rate of 0.005. If you look at the y-axis scale you can see how small an increment this is (one quarter of one notch), and how quickly we are heading that way.

In fact it only requires 1 in 200 households to welcome another person. Seems realistic to me, considering how popular this trend is amongst my peer group. Also, considering that the average dwelling is much larger now than when the occupancy rate was 2.6 back in 1982, such a shift would barely be noticable.

I have mentioned before how this adjustment in occupancy rate occurs, for example:
This is happening and there is plenty of scope for it to continue. In 2003-4, 35% of households reported one spare bedroom, while 42% reported more than one spare bedroom. That’s at least 9.4million spare rooms in existing dwellings.

So I caution the property bulls to be realistic with their investments. Don’t expect a boom of 6 years to be followed by a six month bust. If you want to get into the market now, buy on the high rental yield and find good tenants. And of course, don’t forget about location.