Now to the issues raised by my lovely friends.

The first interesting point raised (thanks Angie) is that we are not recycling goods themselves, simply the packaging or vessel that delivers the good. How can these two things be separated in a physical sense? Without the vessel, the newspaper to deliver the news, or the bottle to deliver the drink, there is no news or drink – since we cannot consume these things without their complementary packaging. Even with the Internet, consuming news requires computing power and a global communications network for the delivery. You can take this to the extreme – cars deliver travel, computers deliver communications and entertainment, food delivers nutrition, clothes deliver warmth and so on. Quite simply, the physical goods we consume to deliver these human desires are the ‘best’ ways we can do it. This type of logic is an extension of Becker’s theory of the household, developed in the 1970’s to explain the way we organise ourselves to maximise the services that generate satisfaction rather than goods themselves (by the way, he won a Nobel prize for his work, and if you want to read some more about it start here). 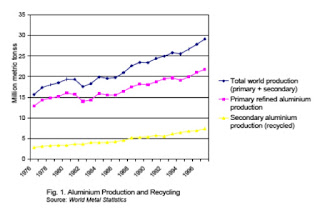 The comment was made (again, thanks Angie) that a new equilibrium quantity of new and recycled materials will emerge – this is definitely true. I am not saying that this new equilibrium quantity of new glass is always higher (but it can be). But this new equilibrium almost always mean the total consumption of both new and recycled material be higher than before, and the price of goods made from these materials will be lower. The aluminium graph supports this stance. Total production is higher (and rising very steeply) but unlike this graph, primary production does not need to continue to rise, and this ‘extra’ material can all be sourced by recycling.

Of course there are limits to recycling as well. Not all of this can be sourced from recycling. Many of the goods made from aluminium have quite long lifetimes (think construction materials, car and bike frames and so on), and will not be available to recycle for many years. Thus if we reach this limit, either new production will begin to increase more rapidly, or substitute resources will be found (with their own associated environmental problems).

One point I have tried to make clear is that resources saved are not spared, but only spared from one use to be employed in others. Unless there is some limit (and a physical one will do) the consumption of raw materials will continue to expand. I will save a thorough exposition for another time, but read ‘Jevons paradox and the myth of resource efficiency improvements’ by Polimeni, Mayumi, Giampietro and Alcott, or ‘Why conservation fails’ by Herbert Inhaber.

Many people find this idea hard to grasp. I would like to step through a couple of thought exercises to get this message across. First think back to the movie ‘The Gods must be crazy’. If you don’t know the one, a glass bottle falls from a plane onto the head (if I remember correctly) of an African tribal man. This bottle is found to be quite useful for starting fire, crushing seeds an many other applications, and causes hilarious disruption to the tribe. But the message here is that by reusing the bottle, it enabled the tribe to be more productive, and consume more nuts, berries, and other resources. Without the bottle, their resource consumption would have been lower than what it is with the bottle!

Alternatively you could think of a subsistence farming family in Cambodia. Imagine they have a large harvest and trade some food from a large can of kerosene for their lamps. When it is all used, instead of throwing away the can, they use it to store water for their trip to the local river. So now, because of this reuse of the can, they need to take less trips for their daily water, and have more time to work the land, thus enabling them to produce more, have more surplus, and trade for more kerosene – and the cycle goes on. It is our very innovative and productive uses for materials that cause as increase in consumption of them.

Another comment on the previous post is that a reduction in costs from recycling will not necessarily result in a reduced price of goods, but may be taken as profit. But what then will happen with the profits – they will inevitably be spent on some kind of consumption. This is the rebound effect, and it the reason I believe that recycling will generally lead to increased consumption of other resources. For example, even if recycling resulted in a reduced consumption of a single material/resource, because as a society we are not spending less on that material, we will be spend more on others.

Another thought experiment is probably helpful. Think of two households. One household sees kids in the other household using brand new paper for colouring, and offers some used (on one side) paper for the kids thinking that it will ‘save’ paper. The trade/gift takes place. Now the kids are colouring the back of old tax returns (or something). But has this decreased consumption of paper, or resources as a whole? Each household has the same income as ever, and therefore the ability to consume goods. The money saved by using old paper for the kids colouring is simply going to be spent elsewhere. Not necessarily on paper of course, but on some resource – maybe fuel for the car for a trip to the coast?

This type of flow on effect is why I believe the message that recycling cannot reduce resource consumption in total is so important. When one resource becomes very expensive as natural limits are reached, it stimulates substitution of that resource with another. When many of these limits are reached, total production may begin to fall unless we can use the limited quantity of inputs more efficiently. But if recycling encourages more resource consumption in total, we are simply accelerating our approach to these limits.

What about a ban on recycling then? Would this be more effective? It would drive up the prices of some raw materials, subsequently driving up the price of final consumer goods, which means we would consume less of them. But of course this price rise would encourage substitution towards other cheaper materials. If we banned glass recycling, for example, we might see more plastic bottles and cans.

Maybe we should not get too carried away with our passionate environmental stance until we get to the bottom of things.
Email ThisBlogThis!Share to TwitterShare to FacebookShare to Pinterest